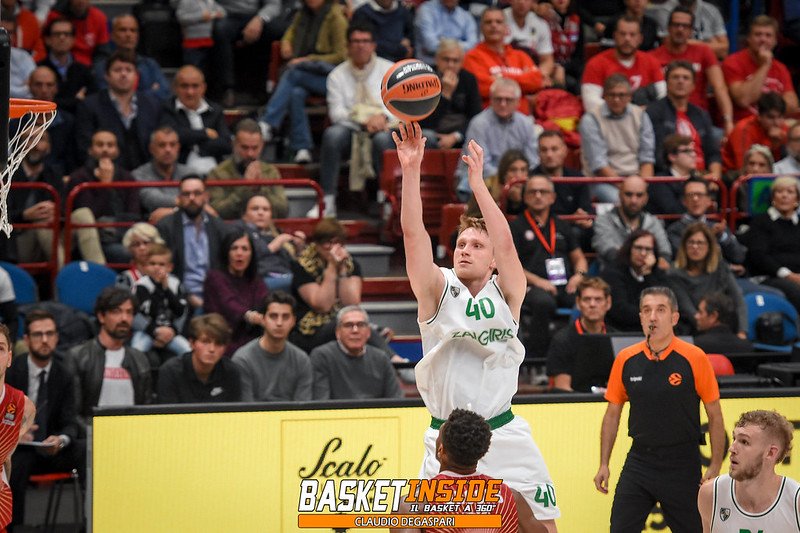 Marius Grigonis dello Zalgiris Kaunas è l’MVP del mese di Ottobre in EuroLega.
Il fantastico mese dello Zalgiris non è passato inosservato. Vittorie come importanti come quella contro l’Anadolu Efes e un mese da grande protagonista con un Marius Grigonis strepitoso.
Il lituano ha viaggiato ad oltre 15 punti di media e con oltre il 50% dal campo in questo mese.
Qui di seguito il comunicato di EuroLeague:
“He emerged last month as a go-to leader on a team that has already in this young season accomplished something unprecedented. And now, for his key role in helping Zalgiris Kaunas lock down a share of first place, 26-year-old swingman Marius Grigonis is Euroleague Basketball’s choice as the Turkish Airlines EuroLeague MVP for October. His numbers are more than respectable, but perhaps the most important one shows Grigonis averaging at least 4 minutes more than anyone else on a Zalgiris team that is the first in EuroLeague history to win four road games in four countries during the same month. In three of them, Zalgiris trailed after 30 minutes on other teams’ courts, but Grigonis was good for a combined 19 points to spur those fourth-quarter comebacks on to victory. At month’s end, Zalgiris had a 5-1 record and was tied for the league lead despite having traveled more than 15,000 kilometers round trip. All those hours in transit didn’t affect Grigonis during all his time on court helping Zalgiris to its longest road winning streak this century – which is also the stuff that MVPs of the Month are made of.
The MVP of the Month honor is now in its 17th season. Although statistics and performance index ratings are taken into consideration for the award, they alone do not determine who is honored. The winner is named by Euroleague Basketball based on his and his team’s performance during the month in question.
Zalgiris opened the season in Piraeus, Greece by staring down an 11-point deficit, 58-47, after three quarters against host Olympiacos. Grigonis then scored 7 points in less than 3 minutes to spark a comeback, adding 4 rebounds and 2 assists in the fourth quarter as Zalgiris rallied to win 67-68. He led Zalgiris in scoring, with 15 points, in assists, with 4, and in PIR with 17. Next, visiting undermanned Khimki Moscow Region, Grigonis went for career highs of 21 points and 5 three-pointers made in a 70-84 victory. Staying on the road to start the first double-round week, Grigonis hit 2 key late free throws among his 8 points and 3 assists as Zalgiris rallied for a 69-75 win over Crvena Zvezda mts Belgrade. Two days later in the team’s home opener, Grigonis had 12 points in a runaway 89-73 triumph over Anadolu Efes Istanbul, his same scoring total as the next game, an 82-94 home loss to Valencia Basket. Zalgiris finished October as it had started the month, rallying from double-digits down on the road to win 74-83 at LDLC ASVEL Villeurbanne. In that one, Grigonis established his second career-high night of the month with 25 points, 14 of which came after halftime as Zalgiris held its place alongside FC Barcelona at the top of the standings.
In his six October games, Grigonis averaged 15.5 points – seventh-best among all EuroLeague scorers – and did so with impressive shooting percentages: 58.1% on two-pointers (18 for 31), 44.4% on threes (12 for 27) and 100% on free throws (21 for 21). Just three EuroLeague players have made more triples at a higher rate than Grigonis so far. This is the first monthly award for Grigonis, who is playing in his third EuroLeague season. He is the fourth Zalgiris player so honored – after Marcus Brown, his current teammate, Paulius Jankunas, and Brandon Davies. He is just the fifth Lithuanian ever to be chosen for the award – after Arvydas Macijauskas (twice), Ramunas Siskauskas (twice) and Jankunas. By joining those illustrious lists, Grigonis gives Zalgiris fans even more to celebrate after an already fantastic first month of the season.”