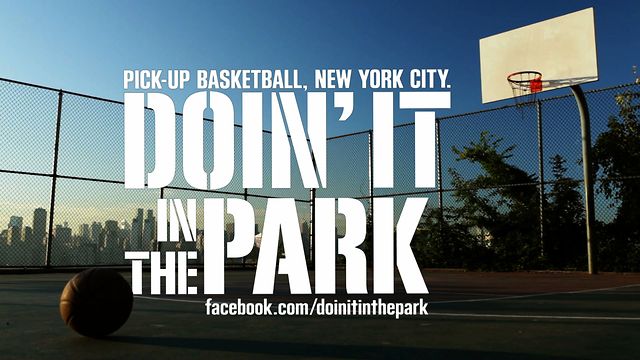 Forget about special effects or blockbuster budgets because we’re talking about a documentary about street basketball, the purest and original meaning of basketball where everyone is the same: no sponsors, no coaches and no contracts, just a man against another, me against you. This documentary is exactly about street basketball, more specifically in the city of New York, the streetball Mecca and the home of one of the two directors: Bobbito Garcia. (To read the directors’ bios go to the end of the article).

Bobbito, with his French friend Kevin Couliau, the other director, visited 180 of the 700+ playgrounds of New York, playing on these but also talking with NBA legends like “Doctor J” Julius Erving and Kenny “The Jet” Smith or with playground immortal names such as Richard “Pee Wee” Kirkland and Jack “Black Jack” Ryan but also with normal people who are going to play the typical after school or after work pick-up game with friends, schoolmates and colleagues. That’s why in the movie you can see, or better, you can live a lot of different personal stories developing at the same time. The two directors travelled around “the city that never sleeps” just with their bicycles carrying in their backpacks all the necessary to shoot the documentary and of course a basketball. This brand new way to intend a sport documentary gives the spectator the chance to live the real essence of pick-up basketball but also to feel the real passion for this way of playing the game, not just inside the playground but also before the game, when a rush of emotions hits you walking in the direction of your favorite court. It doesn’t matter if you are under the sun, rain or snow, you play just for the joy of playing. In little words, Doin’ It In The Park, with this “on-the-road” way of shooting, captures the spectator and transport him inside the playgrounds of New York.
Bobbito Garcia and Kevin Couliau made this travel around the playgrounds even more delightful adding amazing views of the city and very interesting talks with the legends we have already talked about. Believe me, for people who are keen of streetball there’s nothing like listen to “Pee Wee” Kirkland talking about it and for people who don’t know nothing about this culture there isn’t a better way to fall in love with it. That’s why I can bet that everyone who starts to know pick-up basketball with Doin’ It In The Park will become the greatest fan of this movement by the end of the movie.

The logo of the campaign on Kickstarter.com
Photo took from doinitinthepark.comThe movie (that will be released in May) has already received great comments from the critics and important awards such as the “Audience Award, Best Feature” at the Annual Urbanworld Film Festival and the one for “Best Documentary” at the Annual New Jersey Int’l Film Festival. But being considered a great movie isn’t enough to do a worldwide release, indeed this is an independent documentary so it’s totally self-produced and that’s why Bobbito and Kevin are looking for funds. The American-French couple of directors with Puerto Rican background decided to start an ambitious campaign on Kickstarter.com in order to collect 35.000 dollars before February 20th. This money will be used to pay music copyrights, artwork and posters but also DVDs, Blu-Rays and of course advertisement, promotions and theatrical booking. The point that everyone have to understand is that is not a way of earning money but just a campaign to collect the necessary amount to release this movie worldwide and let everyone know about pick-up basketball. Everyone can, and should, donate, it doesn’t matter how much, you can give 1 dollar or 1.000 or even more, everyone can make the difference, you just have to click on this link (http://www.kickstarter.com/projects/doinitinthepark/doin-it-in-the-park-pick-up-basketball-nyc). Not only your donations will help the two directors to release the movie but they will also give you some benefits indeed, depending on how much you donate, you will receive some rewards: from the movie’s poster to a DVD copy signed by the two directors, from the possibility to download the HD version of the movie before the release date but also the opportunity to watch a New York Knicks’game with Garcia and Couliau.

If you really can’t wait till May and you need more information about the movie you can visit the official website of Doin’ It In The Park (doinitinthepark.com) where you can read the words of the two directors but also see some exclusive videos. After that I suggest you to donate even 1 dollar on kickstarter.com, because everyone should know more about pick-up basketball through this movie. Why? Because, as the lovers of this culture used to say, “You can play high school or college for four years. You can play Pro for a decade. You can play pick-up … for life”.

Photo took from strictlyfitteds.comBobbito is a true New York legend. Born in 1966, with Puerto Rican origins, Kool Bob Love (one of his nicknames) begins to become famous in 1990 when he starts to host The Stretch Armstrong and Bobbito Show on a radio called WKCR, a radio show where Bobbito used to invite young underground rappers and let the freestyle on air. A lot of these rappers will become real legends; indeed, we can find names like Nas, Big Pun, Jay-Z, Busta Rhymes, Wu-Tang Clan, Fugees, Notorious B.I.G. and many others. That’s why the magazine ‘The Source’ used to call Bobbito’s Show the best Hip Hop radio show ever. But what about pick-up basketball? Don’t worry about it. Bobbito has always been an important member of this movement in NYC: he’s always played in the city’s playground with great results and in 2003 he decided to create BOUNCE: From the Playground, the first magazine entirely dedicated to streetball. But Bobbito’s success is far from ended.  As a great sneaker lover he had a big success, as a writer with his book called Where’d You Get Those?: New York City’s Sneaker Culture 1960-1987. After that he’s never stopped carrying on his love for basketball and sneakers so he worked with ESPN and Madison Square Garden Network but also whit Nike, Adidas. He also gave his voice to some street-basketball and basketball videogames like NBA Street Vol.2, NBA Street V3, NBA 2k8, NBA 2k9 e NBA 2k10. Of course Bobbito never forgets his first love: music. That’s why he also created his own label, “ALALA Records”.

Photo took from vimeocdn.comHelping Bobbito in this documentary is the Frenchman Kevin Couliau, known as the best and most prolific street basketball photographer in the world. In his life he worked for a lot of magazines around the world and he also was the man behind some of the videos and commercials of important brands like Jordan (working on “Quai 54” annual video series) and Nike (working on “Basketball Never Stops” campaign). He also added his genius to the Australian documentary about basketball called “The Mystery of Flying Kicks”. If that isn’t enough you can directly see his work as a director watching the Red Café and Pete Rock video called “Heart & Soul of New York City”, an amazing mix of music and NYC streetball directed personally by Kevin.